skip to main | skip to sidebar

Going Home: a trip to Lacmaan

We came down the bus, our bulging backpacks straining on our thickly-sweatered backs, the Sagada-woven straps cutting through an inch of wool and synthetic clothing at the catch between our arms and tired shoulders. We waited for the bus konduktor to release our boxes of pasalubong from the dust-coated compartment under the passenger seats. There were two boxes secured tightly with straw, and a large can of assorted biscuits.

The konduktor closed the compartment, slapped the bus' wall thrice and caught the bus' stairs as the vehicle started rolling through the narrow road of rock and mud. The road sliced through the thickly-forested mountainside.

With vague curiousity, I watched the lonely vehicle driving blindly through the thick fog. It would be swallowed by it, I thought detachedly, as if I had not occupied the same vehicle for close to nine hours. I did not dally, however, and quickly I tossed my backpack a bit to loosen the straps on my shoulders. I started for the box of saltwater fish and lowland fruits. The thing weighed around three kilos, but I picked it up to help me balance the load on my back.

And then I raised my face to the cool, damp air that was heavily-scented with pinewood, and I welcomed the mild spray of vapor---like sea-spray when the waves hit the shore with such passion---on my cold white cheeks. Memories of childhood trips and two-week stays flooded my mind as I breathed the damp air. Images played like montage before my eyes: images of me and my playmates running through the narrow path that lined the watered payeo, of days spent catching tadpoles and small fish in clear rivers, of us singing silly folk songs in the vernacular that I could not understand, of sleeping soundly even as the fierce December wind howled in our small, Cordilleran village. The warm aroma of rice-coffee, the smell of pine kindling, the constricting air of soot in the dirty kitchen---even these came back, along with the realization that this is not a daydream. I never felt like this for the longest time, this disarming wave of emotions, of finally coming home. I could weep from this, I could weep from sheer exhilaration. I instead closed my eyes, damned the unsappy side of me, and drank the joy of at last being home.


*this was taken from the journal I kept the last time I was at Lacmaan. That was way back in 2004, when relatives from my mother's side called for a long-delayed reunion. there are some more things I wrote, but this one is the longest. oh, and I wasn't able to continue the day-keeping because so many things happened then and I did not find the journal until we were back in baguio. -
scribbled by aBBy at 9:25:00 AM 2 comments: 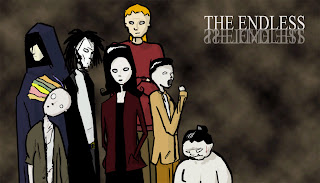 i have recently been hooked into neil gaiman's chronicles of morpheus' family, the Endless. as i'm still in the process of finishing the first and only gaiman i managed to borrow, i'll be able to tell more in the coming days. ^_~
scribbled by aBBy at 6:24:00 PM No comments:

it would have been forgotten forever had it not slipped out from between the pages of my social psychology book. it was an artwork, a pencil sketch of a young man's face. it was a smug face, with long fang-like bangs that reminds me of a RAN male character. the edge of the bond paper was slightly singed for effect, and at its foreground, a song was printed. the song is called "Reality".

i could not help but smile at the memento. it was a poem i wrote on the spot about a year ago, when, as a peer facilitator for the PIC block, i needed something to motivate the freshies on their upcoming Poetry Fest. henson was the first to heed the GCO's call for freshpeople's poems; i remember him submitting poem after poem after poem. what's distinctive about his work is the way he incorporated art into it. the visual added flavor to the lyrical, all in one paper. his poems were highly original, and were naturally chosen to be among the finalists to the Fest. we were hopeful. after the first day of the exhibit, however, henson expressed his fear. the other entries were, in his words, "scary". i tried pep talk, but he's too intelligent for that, i guess; he is one of those people who know their abilities well enough---perhaps too well enough---to keep them from having an overblown picture of themselves. after some time, he said (more to himself than to anyone) that winning is not everything. i cannot remember what prompted me to write the poem on the spot, but when i did finish it, i gave it to henson. it was on a scrap of paper, untitled and messy. it was the only copy of the poem, and i gave it to him. a week after Poetry Fest, he returned the poem to me. this time it was clothed. the untitled poem now has melody. he entitled it "Reality", added a verse that became the song's chorus, and placed the chords to it. he only had one copy of it, and he gave it to me. the simple gesture of giving, and the surprise of having co-written a song without actually meaning to, became one of my little victories. henson will remain a brother among the many brothers and sisters i thankfully gain in this lifetime.

Death stares at me, through the cold stoic pits of the idiot box
my mortality bites me, incessantly
murder at daybreak; and i rise with the victim's corpses
to watch the day's bloody advent
casualties at noontide, accidents piling
as dust settles on teh glassy surface of my glass of drink

Bm-G-F#
Death stares at me, through the cold stoic pits of the idiot box
my ignorance bites me, incessantly
scrapes and scratches, broken limbs, gaping wounds, wailing mouths
all united in pain

Death stares at me, through the cold stoic pits of the idiot box
How I wish I could blink away the horror.-
scribbled by aBBy at 7:11:00 PM No comments: